'The Wolf and the Crane', 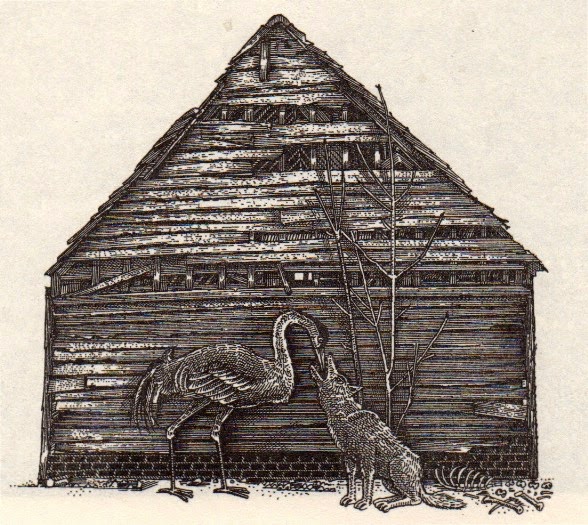 'The Wolf and the Crane', an illustration by John Vernon Lord
in Aesop's Fables, Jonathan Cape, 1989, page 85.
The Text:


The Wolf and the Crane
A Wolf, after devouring his prey, happened to have a bone stick in his throat, which gave him so much pain, that he went up howling up and down, and importuning every creature he met to lend him a kind hand in order to his relief; nay he promised a reasonable reward to anyone who should perform the operation with success. At last, the Crane undertook the business, ventured his long neck into the rapacious felon’s throat, plucked out the bone, and asked for the promised reward. The Wolf, turning his eyes disdainfully towards him, said, I did not think you had been so unconscionable: I had your head in my mouth, and could have bit it off whenever I pleased, but suffered you to take it away without any damage, and yet you are not contented.

Moral:  Do not expect gratitude for doing a good turn to a tyrant but consider that being left alone is reward enough.