The Flea and the Man 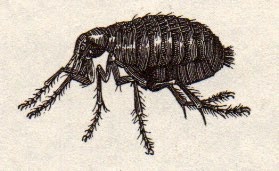 The Flea and the Man
A FLEA bit a Man, and bit him again, and again, till he could stand it no longer, but made a thorough search for it, and at last succeeded in catching it. Holding it between his finger and thumb, he said - or rather shouted, so angry was he - “Who are you, pray, you wretched little creature, that you make so free with my person?” The Flea, terrified, whimpered in a weak little voice, “Oh , sir! pray let me go; don’t kill me! I am such a little thing that I can’t do you much harm.” But the men laughed and said, “I am going to kill you now, at once: whatever is bad has got to be destroyed, no matter how slight the harm it does.”

Mortal: The persistent aggravations by the small on the powerful can result in destruction.