'The Ape and the Dolphin' 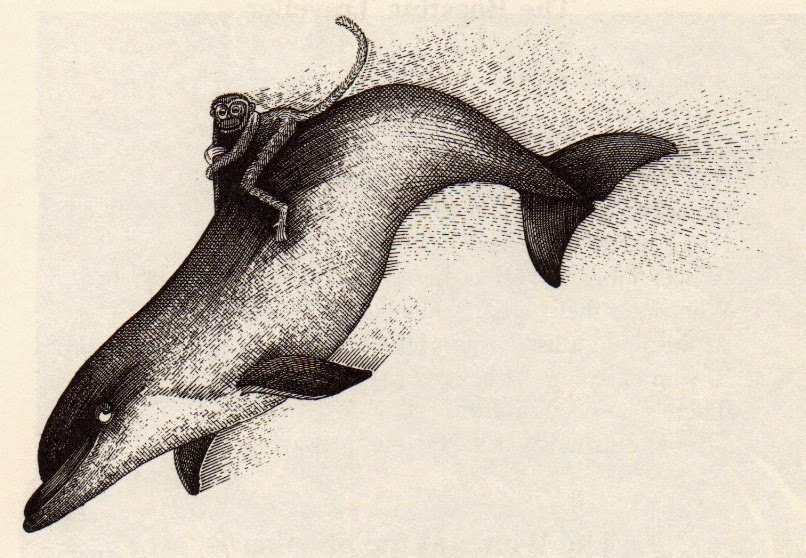 'The Ape and the Dolphin', an illustration by John Vernon Lord
in Aesop's Fables, Jonathan Cape, 1989, page 135.
The Text:

The Ape and the Dolphin
People were us’d in the Days of Old to carry Gamesome Puppies and Apes with ’em to Sea, to pass away the Time withall. Now there was One of these Apes, it seems, aboard a Vessel that was cast away in a very great Storm. As the Men were Paddling for their Lives, and the Ape for Company, a Certain Dolphin that took him for a Man, got him up on his Back, and was making towards Land with him. He had him into a Safe Road call’d the Pyraeus, and took occasion to Ask the Ape, whether he was an Athenian or not? He told him Yes, and of a very Ancient Family there. Why then (says the Dolphin) You know Pyraeus: Oh! exceedingly well says T’other. (taking it for the name of a Man) Why Pyraeus is my very Particular Good Friend. The Dolphin, upon This, had such an Indignation for the Impudence of the Buffoon-Ape, that he gave him a Slip from between his Legs and there was an End of my very Good Friend, the Athenian.

Moral: Braggarts and liars are likely to be dropped by their one-time supporters.