'The Snake and his Tail' 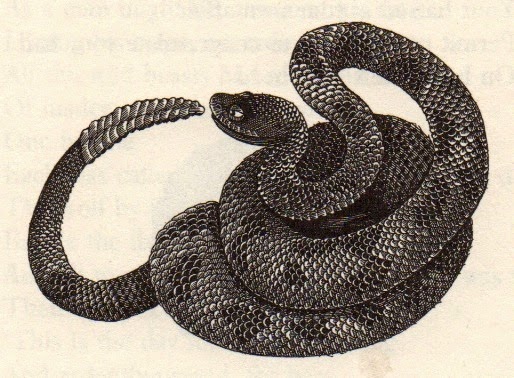 'The Snake and his Tail', an illustration by John Vernon Lord
in Aesop's Fables, Jonathan Cape, 1989, page 65.

The Snake and His Tail
A snake's tale once decided there was no need
For the head to go first. 'It's my turn to lead.'
'Be quiet,' the snake's other members said.
'Wretched appendage, how could you go first
Without the eyes or nose or ears
By which each living creature steers?'
But their arguments didn't prevail
And the rational head lost out to the mindless tail,
The roles were reversed,
And, dragging them blindly along, the tail went first.
When the snake fell into a rocky pit and was almost killed,
The tail which was so self-willed
Began humbly apologising, pleading:
'Save us, please, O head, our master!
The mutiny I raised has ended in disaster.
Put me back at the rear
And I'll obey and you needn't fear
Any more accidents with me leading.'

Moral: Leaders need to have a sense of direction.