'The Cocks and the Partridge' 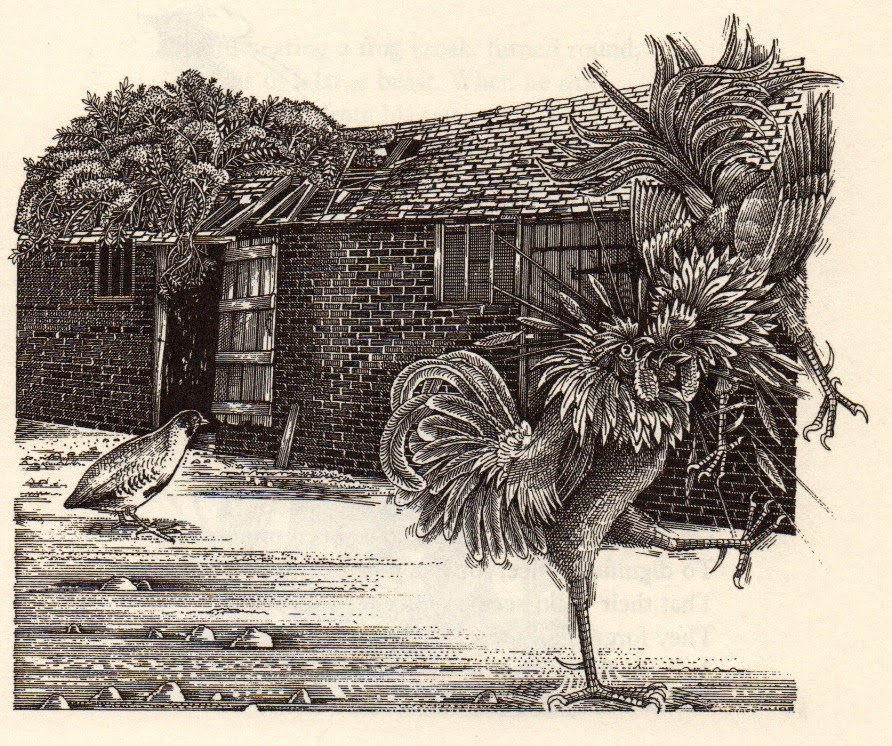 'The Cocks and the Partridge', an illustration by John Vernon Lord
in Aesop's Fables, Jonthan Cape, 1989, page 53.

The text, in a translation of La Fontaine's version of the fable:

The Cocks and the Partridge
With a set of uncivil and turbulent cocks,
That deserved for their noise to be put in the stocks,
A partridge was placed to be rear’d.
Her sex, by politeness revered,
Made her hope, from a gentry devoted to love,
For the courtesy due to the tenderest dove;
Nay, protection chivalric from knights of the yard.
That gentry, however with little regard
For the honours and knighthood wherewith they were deck’d,
And for the strange lady as little respect,
Her ladyship often most horribly peck’d.
At first, she was greatly afflicted therefor,
But when she had noticed these madcaps at war
With each other, and dealing far bloodier blows,
Consoling her own individual woes. -
‘Entail’d by their customs,’ said she, ‘is the shame;
Let us pity the simpletons rather than blame.
Our Maker creates not all spirits the same;
The cocks and the partridges certainly differ,
By a nature than laws of civility stiffer.
Were the choice to be mine, I would finish my life
In society freer from riot and strife.
But the lord of this soil has a different plan;
His tunnel our race to captivity brings,
He throws us with cocks, after clipping our wings.
’Tis little we have to complain of but man.’

Moral: It is a little easier to endure the taunts of others when they even quarrel among themselves.