'The Frogs who asked for a King' 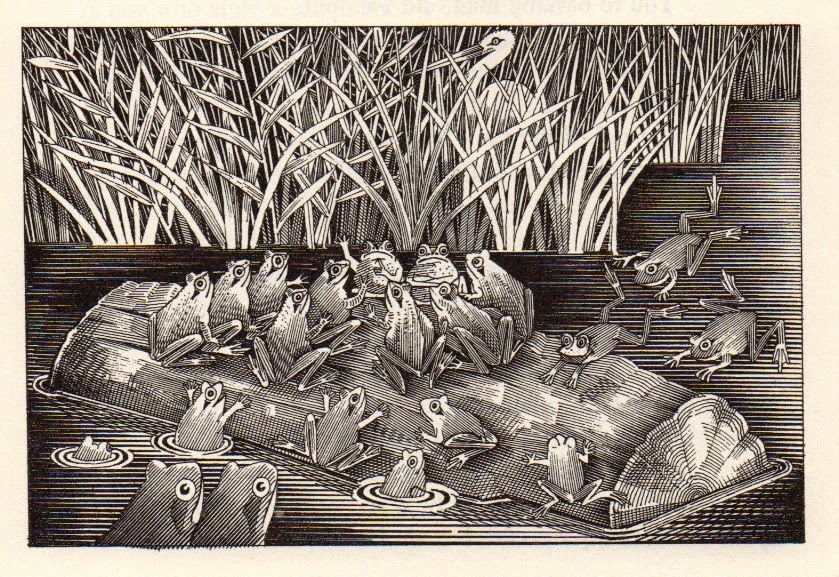 'The Frogs who asked for a King', an illustration by John Vernon Lord
in Aesop's Fables, Jonathan Cape, 1989, page 23.

The Text by Roger L'Estrange (with idiosyncratic spelling in tact):

The Frogs who asked Jupiter for a King
In the days of Old, when the Frogs were All at Liberty in the Lakes, and grown quite Weary of living without Government, they Petition’d Jupiter for a King, to the End that there might be some Distinction of Good and Evil, by Certain Equitable Rules and Methods of Rewards and Punishment. Jupiter, that knew the Vanity of their Hearts, threw them down a Log for their Governour; which upon the first Dash, frighted the whole Mobile of them into the Mudd for the very fear on’t. This Panick Terror kept them in Awe for a while, ’till in good time, one Frog, Bolder than the Rest, put up his Head, and look’d about him, to see how squares went with their New King. Upon This, he calls his Fellow-Subjects together;  Opens the truth of the Case; and Nothing would serve them then, but Riding a-top of him, Insomuch that the Dread they were in before, is now turn’d into Insolence and Tumult. This King they said was too Tame for them, and Jupiter must needs be Entreated to send ’em Another: He did so, but Authors are Divided upon it, whether ’twas a Stork, or a Serpent; though whether of the Two soever it was, he left them neither Liberty, nor Property, but made a Prey of his Subjects. Such was their Condition in fine, that they sent Mercury to Jupiter yet once again for Another King, whose Answer was This: They that will not be Contented when they are Well, must be Patient when Things are Amiss with them; and People had better Rest where they are, than go farther, and fare Worse.

Moral: We should be content to be led by someone who is meek and innocuous rather than suffer the rule of an evil tyrant.