The Bellman serves grog to the Snark crew 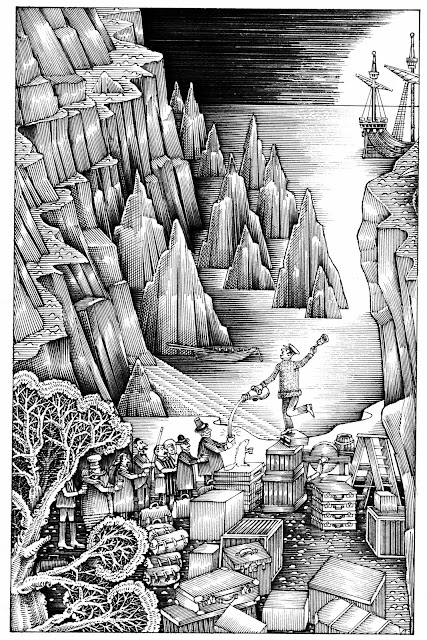 The Bellman serves grog to the Snark crew, an illustration by JVL in Lewis Carroll's
The Hunting of the Snark, Artists' Choice Editions, 2006.

31
But the danger was past--they had landed at last,
With their boxes, portmanteaus, and bags:
Yet at first sight the crew were not pleased with the view,
Which consisted to chasms and crags.

32
The Bellman perceived that their spirits were low,
And repeated in musical tone
Some jokes he had kept for a season of woe--
But the crew would do nothing but groan.

33
He served out some grog with a liberal hand,
And bade them sit down on the beach:
And they could not but own that their Captain looked grand,
As he stood and delivered his speech.

34
"Friends, Romans, and countrymen, lend me your ears!"
(They were all of them fond of quotations:
So they drank to his health, and they gave him three cheers,
While he served out additional rations).