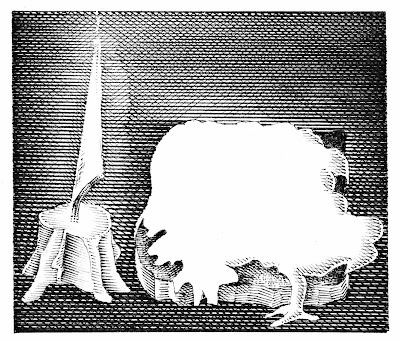 'Candle-ends and Toasted Cheese', an illustration by JVL, in Lewis Carroll's
The Hunting of the Snark, Artists' Choice Editions, 2006.

6
There was one who was famed for the number of things
He forgot when he entered the ship:
His umbrella, his watch, all his jewels and rings,
And the clothes he had bought for the trip.

7
He had forty-two boxes, all carefully packed,
With his name painted clearly on each:
But, since he omitted to mention the fact,
They were all left behind on the beach.

8
The loss of his clothes hardly mattered, because
He had seven coats on when he came,
With three pairs of boots--but the worst of it was,
He had wholly forgotten his name.

10
While, for those who preferred a more forcible word,
He had different names from these:
His intimate friends called him "Candle-ends,"
And his enemies "Toasted-cheese."

11
"His form in ungainly--his intellect small--"
(So the Bellman would often remark)
"But his courage is perfect! And that, after all,
Is the thing that one needs with a Snark."

12
He would joke with hyenas, returning their stare
With an impudent wag of the head:
And he once went a walk, paw-in-paw, with a bear,
"Just to keep up its spirits," he said.