'The Owl and the Grasshopper' 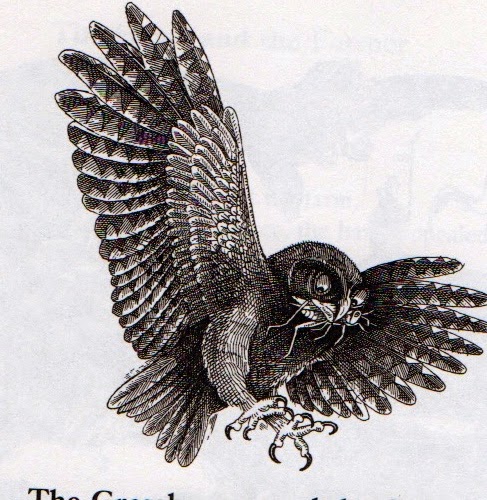 'The Owl and the Grasshopper', an illustration by John Vernon Lord
in Aesop's Fables; 1989, page 82.

The Owl and the Noisy Grasshopper
AN Owl sat sleeping in an Ivy-bush. But a Grashopper, who was singing beneath, would not let her be quiet, abusing her with very indecent and uncivil Language; telling her she was a scandalous Person, who plied a-nights to get her Living, and shut her self up all day in a hollow Tree. The Owl desir’d her to hold her Tongue and be quiet: Notwithstanding which, she was the more impertinent. She beg’d of her a second time, to leave off; but all to no purpose: She still grew worse and worse. The Owl, vext at the heart to find that all she said went for nothing, cast about to inveigle her in by a stratagem. And so, says she, Well, since one must be kept awake, ’tis a Pleasure, however to be kept awake by so agreeable a Voice: which, I must confess, is in no way inferiour to the finest Harp. And, now I think on’t. I have a Bottle of excellent Nectar, which my Mistress Pallas gave me; if you have a mind, I’ll give you a Dram to wet your Whistle. The Grashopper, ready to die with Thirst, and, at the same time, pleas’d to be so complimented upon account of her Voice, skip’d up to the Place very briskly: when the Owl advancing to meet her, seiz’d, and without much Delay, made her a Sacrifice to her Revenge: Securing to her self, by the Death of her Enemy, a Possession of that Quiet, which, during her Life-time, she could not enjoy.

Moral: Those who show no consideration for their neighbours may pay a serious penalty.