'The Fox and the Goat' 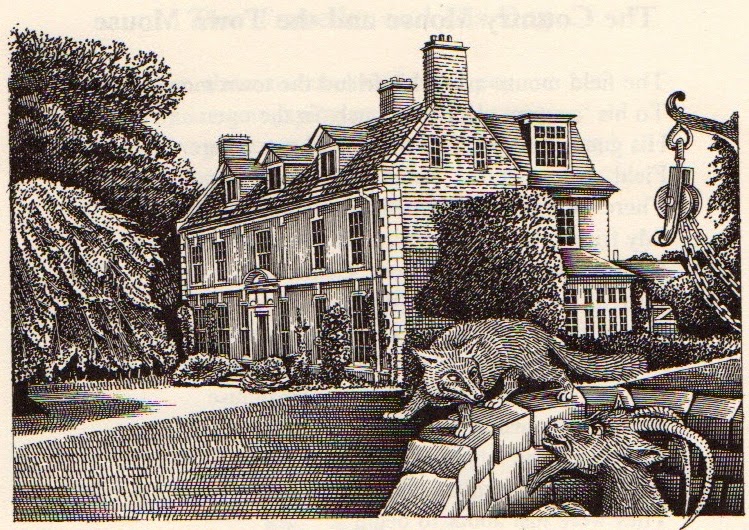 'The Fox and the Goat', an illustration by John Vernon Lord in Aesop's Fables, Jonathan Cape, 1989.

The Fox and the Goat at the Well
A FOX once journey’d and for company
A certain bearded, horned goat had he;
Which goat no further than his nose could see.
The fox was deeply versed in trickery.
These travellers did thirst compel
To seek the bottom of a well.
There, having drunk enough for two,
Says fox, ‘My friend, what shall we do?
’Tis time that we were thinking
Of something else than drinking.
Raise you your feet upon the wall,
And stick your horns up straight and tall;
Then up your back I’ll climb with ease,
And draw you after, if you please.’
‘Yes, by my beard,’ the other said,
‘’Tis just the thing. I like a head
Well stock’d with sense, like thine.
Had it been left to mine,
I do confess,
I never should have thought of this.’
So Renard clamber’d out,
And, leaving there the goat,
Discharged his obligations
By preaching thus on patience: -
‘Had Heaven put sense thy head within,
To match the beard upon thy chin,
Thou wouldst have thought a bit,
Before descending such a pit.
I’m out of it; goodbye:
With prudent effort try
Yourself to extricate.
For me, affairs of state
Permit me not to wait.’
Whatever way you wend,
Consider well the end.

Moral: Look before you leap.