'The Stag at the Pond' 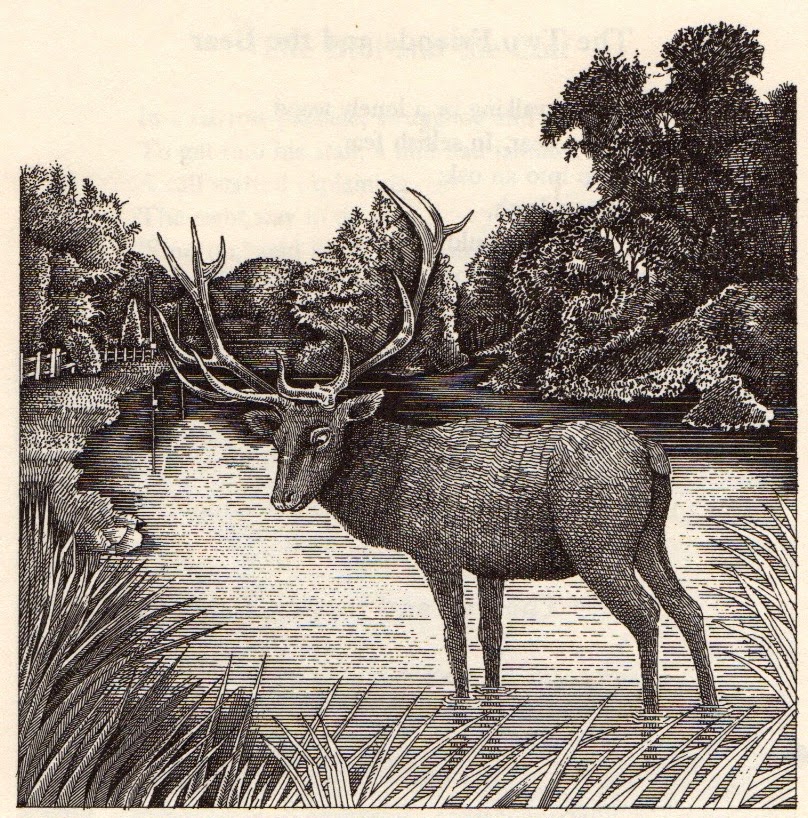 'The Stag at the Pond', an illustration by John Vernon Lord in Aesop's Fables,
Jonathan Cape, 1984, page 72.

The text:
A Stag that had been drinking at a clear Spring, saw himself in the Water; and pleas’d with the Prospect, stood afterwards for some Time contemplating and surveying his Shape and Features, from Head to Foot. Ah! says he, what a glorious pair of branching horns are there! How gracefully do those Antlers hang over my Forehead , and give an agreeable Turn to my whole Face! If some other Parts of my Body were but proportionable to them, I’d turn my back to no body; but I’ve a Sett of such Legs as really make me asham’d to see them. People may talk what they may please of their Conveniences, and what great Need we stand in of them upon several Occasions; but, for my Part, I find them so very slender, and unsightly, that I had e’en as lief have none at all. While he was giving himself these Airs, he was alarm’d with the noise of some Huntsmen, and a Pack of Dogs, that had been just laid on upon the Scent, and were making towards him. Away he flies in some Consternation, and, bound nimbly over the Plain; threw Dogs and Men at a vast Distance behind him. After which, taking a very thick Copse, he had the ill Fortune to be entangled by his Horns in a Thicket; where he was held fast, till the Hounds came in and pull’d him down. Finding now, how it was like to be with him, in the Pangs of Death, he is said to have utter’d these Words: Unhappy creature that I am! I am too late convinc’d, that, what I prided myself so much in, has been the Cause of my Undoing; and what I so much despis’d, was the only Thing that could have sav’d me.

Moral: Look to what is useful before the ornamental, for what is valuable is too often underrated.