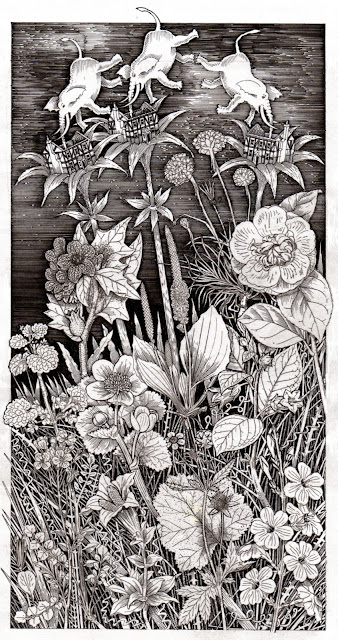 Here is the text at the beginning of the chapter:

Of course the first thing to do was to make a grand survey of the
country she was going to travel through. 'It's something very like
learning geography,' thought Alice, as she stood on tiptoe in hopes
being able to see a little further. 'Principal rivers -- there ARE
none. Principal mountains -- I'm on the only one, but I don't think
it's got any name. Principal towns -- why, what ARE those
creatures, making honey down there? They can't be bees -- nobody
ever saw bees a mile off, you know -- ' and for some time she stood
silent, watching one of them that was bustling about among the
flowers, poking its proboscis into them, 'just as if it was a regular
bee,' thought Alice.

However, this was anything but a regular bee: in fact it was an
elephant -- as Alice soon found out, though the idea quite took her
breath away at first. 'And what enormous flowers they must be!'
was her next idea. 'Something like cottages with the roofs taken off,
and stalks put to them -- and what quantities of honey they must
make! I think I'll go down and -- no, I won't JUST yet, ' she went
on, checking herself just as she was beginning to run down the hill,
and trying to find some excuse for turning shy so suddenly. 'It'll
never do to go down among them without a good long branch to
brush them away -- and what fun it'll be when they ask me how I
like my walk. I shall say -- "Oh, I like it well enough -- "' (here
came the favourite little toss of the head), '"only it was so dusty and
hot, and the elephants did tease so!"'

'I think I'll go down the other way,' she said after a pause: 'and
perhaps I may visit the elephants later on. Besides, I do so want to
get into the Third Square!'

So with this excuse she ran down the hill and jumped over the first
of the six little brooks.