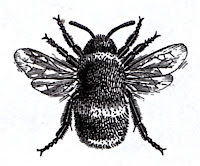 Bees are the crucial pollinators of our plants and they are diminishing in numbers. Some blame insecticides and other blame Varroa mites which carry a virus that are damaging to bees. Whatever the reason, something needs to be done about protecting this crucial species on our planet.
-----------------

Here are some fables about bees. This first one is a fable told by Roger L'Estrange in his publication of 1692, with his idiosyncratic language and spelling in tact.

Jupiter and the Bee
A Bee made Jupiter a Present of a Pot of Hony, which was so kindly Taken, that he bad her Ask what she would, and it should be Granted her. The Bee desir’d. that where-ever she should set her Sting, it might be Mortal. Jupiter was loth to leave mankind at the Mercy of a Little Spiteful Insect, and so bad her have a care how she Kill’d any Body; for what Person soever she attacqu’d, if she left her Sting behind her, it should cost her her Life.

Moral: Only spiteful people are willing to hurt others at the cost of their own life.

Here is another fable about bees, again told by Roger L'Estrange.

The Bee-keeper
There came a Thief into a Bee-Garden in the Absence of the Master, and Robb’d the Hives. The Owner Discover’d it upon his Return, and stood Pausing a while to Be-think himself, how This should come to pass. The Bees, in This Interim, came Laden home out of the Fields from Feeding, and Missing their Combs, they fell Powdering in Swarms upon their Master. Well (says he) you are a Company of Senceless and Ungrateful Wretches, to let a Stranger go away Quietly that has Rifled ye, and to bend All your Spite against your Master, that is at this Instant Beating his Brains how he may Repair and Preserve ye.

Moral: It is a serious error to accuse our friends rather than suspect our enemies.

This fable about bees is told in verse by Christopher Smart in his 1761 publication of fables.

The Bees and the Drones
Up in a lofty oak the Bees
Had made their honey-combs: but these
The Drones had asserted they had wrought.
Then to the bar the cause was brought
Before the wasp, a learned chief,
Who well might argue either brief,
As of a middle nature made.
He therefore to both parties said:
“You’re not dissimilar in size,
And each with each your color vies,
That there’s a doubt concerning both:
But, lest I err, upon my oath,
Hives for yourselves directly choose,
And in the wax the work infuse,
That, from the flavor and the form,
We may point out the genuine swarm.”
The Drones refuse, the Bees agree -
Then thus did Justice Wasp decree:
“Who can, and who cannot, is plain,
So take, ye Bees, your combs again.”
This narrative had been suppress’d
Had not the Drones refused the test.

Moral: Put the pretenders to the test of doing what they say.

This fable is by Aphthonius of Antioch (3rd/4th Century AD)

The Bees and the Shepherd
There were bees making honey in a hole of an oak tree. A shepherd discovered them at work and took some of their honey. This caused the bees to surround him and sting him. Finally he decided to clear off, saying, "If the bees are going to be like this I am not going to bother taking their honey".

Moral: If you want something desperately you may have to take the consequences to obtain it.

Another fable about bees, as told by Roger L'Estrange.

The Country-man and Bees
There was a Plodding Country-fellow that was pretty well  to pass in the World, and he might thank a Good Stock of Bees for't. As he was sucking a Comb one day, a Bee caught him by the Tongue: The Pain put him into such a Rage, that he threw down all his Hives upon it. The Bees fell to expostulate the matter with him, what a fool he was to do himself a Mischief because he was Angry at another body: especially considering it was Their Labour and Industry that both Rais'd and Maintain'd him, and if he would not take the Sweet with the Sowr on with another, they'd e'en leave him to shift for himself. Upon this Disgust, they forsook the Poor Man, to his utter Ruine.

This is a fable about bees in Robert Dodsley's collection of fables in an edition of 1802 but first published in 1764.

Bee and Spider
THE bee and the spider once entered into a warm debate which was the better artist. The spider urged her skill in mathematics; and asserted that no one was half so well acquainted as herself with the construction of lines, angles, squares, and circles; that the web she daily wove was a specimen of art inimitable by any other creature in the universe; and besides, that her works were derived from herself alone, the product of her own bowels; whereas the boasted honey of the bee was stolen from every herb and flower of the field; nay, that she had obligations even to the meanest weeds.

To this the bee replied, she was in hopes the art of extracting homey from the meanest weeds would at least have been allowed her as an excellence; and as to her stealing sweets from the herbs and flowers of the field, her skill was there so conspicuous, that no flower ever suffered the least diminution of its fragrance from so delicate an operation. Then, as to the spider's vaunted knowledge in the construction of lines and angles, she believed she might safely rest the merits of her cause on the regularity of her combs; but since she could add to this, the sweetness and excellence of her honey, and the various purposes to which her wax was employed, she had nothing to fear from a comparison of her skill with that of the weaver of a flimsy cobweb;

"for the value of every art," she observed. "is chiefly to be estimated by its use."