'The Eagle and the Arrow' 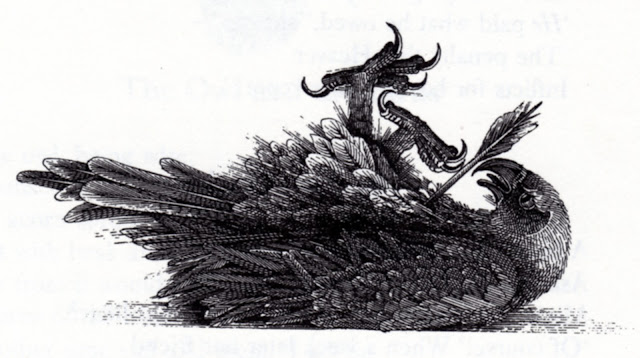 'The Eagle and the Arrow', an illustration by JVL, in Aesop's Fables, Jonathan Cape, 1989.

This is a fable about an eagle being shot by an arrow which has been made with feathers that he recognises as his own. The eagle laments his plight, feeling that it is an insult to have died by means of his very own wings - hoist with his own petard, as it were, or caught in his own trap.

Here is Joseph Jacobs' version of the fable:

An Eagle was soaring through the air when suddenly it heard the whizz of an Arrow, and felt itself wounded to death. Slowly it fluttered down to earth, with its life pouring out of it. Looking down upon the Arrow with which it had been pierced, it found that the haft of the Arrow had been feathered with one of its own plumes. “Alas!” it cried, as it died, “we often give our enemies the means for our own destruction.”

Selected parallels: Aeschylus (c525-c456 BC), in a fragment from his lost Myrmidons, mentioned that this fable existed before his own time; according to the Scholiast on the Aves of Aristophanes (line 808). La Fontaine 2/6. L’Estrange 1/48.  TMI U161. Perry 276a (Babrian, Crusius 185). Byron alludes to this fable in his English Bards and Scotch Reviewers.