'A drawing of muchness' 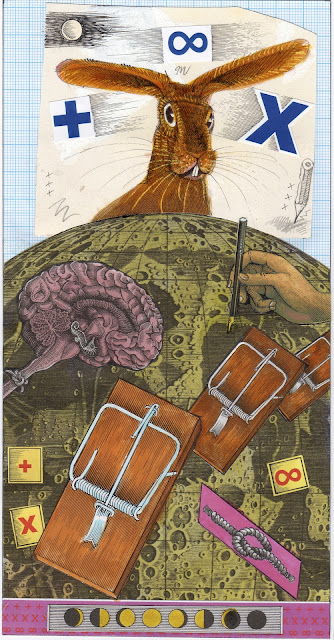 An illustration of 'a drawing of a muchness' by JVL for Lewis Carroll's Alice's Adventures in Wonderland, Artists' Choice Edition, 2009.

For this illustration I attempted to draw just a few items of ‘everything that begins with an M’, such as ‘mouse-traps, and the moon, and memory and muchness’. The notion of such a drawing was muttered by the Dormouse when he told Alice the story of the three little sisters in the treacle well who were learning how to draw. In this picture the March Hare presides over the illustration.
‘Memory’ is exemplified by a knot, as well as a depiction of a ‘hippocampus’, the name of the seat of memory in the brain, which has the shape of a seahorse (the word hippocampus is also the Greek word for seahorse). Conveying a notion of ‘muchness’ visually has been attempted by incorporating addition, multiplication, and infinity signs. On the top right hand side of the moon there is a hand in the act of drawing and a pencil above it – a reminder that this is an illustration of a drawing! And at the bottom we have a strip showing the phases of the moon  - ‘M’ for moon, moon reflecting time’s passage, and moon connected with madness and lunacy.

Here is the actual passage of text during the 'Mad Tea Party' in Alice's Adventures in Wonderland:

`They were learning to draw,' the Dormouse went on, yawning and
rubbing its eyes, for it was getting very sleepy; `and they drew
all manner of things--everything that begins with an M--'
`Why with an M?' said Alice.
`Why not?' said the March Hare.
Alice was silent.
The Dormouse had closed its eyes by this time, and was going
off into a doze; but, on being pinched by the Hatter, it woke up
again with a little shriek, and went on:  `--that begins with an
M, such as mouse-traps, and the moon, and memory, and muchness--
you know you say things are "much of a muchness"--did you ever
see such a thing as a drawing of a muchness?'
`Really, now you ask me,' said Alice, very much confused, `I
don't think--'
`Then you shouldn't talk,' said the Hatter.