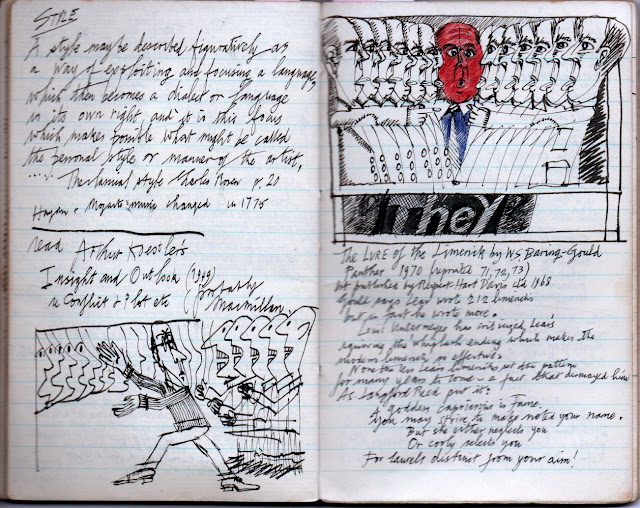 They
A notebook drawing by John Vernon Lord, 1978.


When I carried out this spread I was working on the illustrations to The Nonsense Verse of Edward Lear, in which there are characters called 'they' in the limericks. Lear’s characters inhabit a real world as well as a surreal one of Nonsense.  They are subjected to everyday problems and they are endowed with typical human frailties and feelings, and hardly any of them are righteous.  Very few idealised heroes or heroines can be found among Lear’s Nonsense.  There is a pervading sense of the individual having to cope with life’s vicissitudes in a society which is nearly always ready to be critical - especially the inquisitive ‘they’ of the limericks, who form pressure-groups and behave like nosey-parkers, bureaucrats and bores.  George Orwell referred to ‘they’ as ‘the respectable ones, the right-thinking, art-hating majority’.
Here is an example, among Lear's limericks, of the Old Person of Bow  -

There was an Old Person of Bow
Whom nobody happened to know;
So they gave him some soap,
And said coldly, ‘We hope
You will go back directly to Bow!

Many of Lear’s limerick subjects have to endure such insults as this from the ‘gross besetting crowd’.
‘They’ are what Aldous Huxley described as the force of ‘Public Opinion’ which ‘universally abhors
eccentricity’and who are unable to appreciate talent; as can be witnessed here, for it is ‘they’ again who rebuke the Old Man of Melrose for merely walking on the tips of his toes.